It’s Secret Recipe Club time once again – we get matched up with another food blogger and are charged with making any recipe off of their blog. It’s a surprise on who has who until today – Reveal Day!

I was assigned Desi @ SteakNPotatoesKindaGurl, which is fun because she had me last month and made my Strawberry & Cream Crunch Parfaits (which totally got me craving them again.)

So, it was recipe love at first sight since I ended up making the very first recipe I saw, this craveable Bacon and Roasted Garlic Guacamole. Don’t get me wrong, plenty of Desi’s recipes jumped out at me as I kept saying “just one more post I want to read” while cruising through her blog but I just couldn’t get this one out of my head – I mean, bacon, avocado and roasted garlic all together? 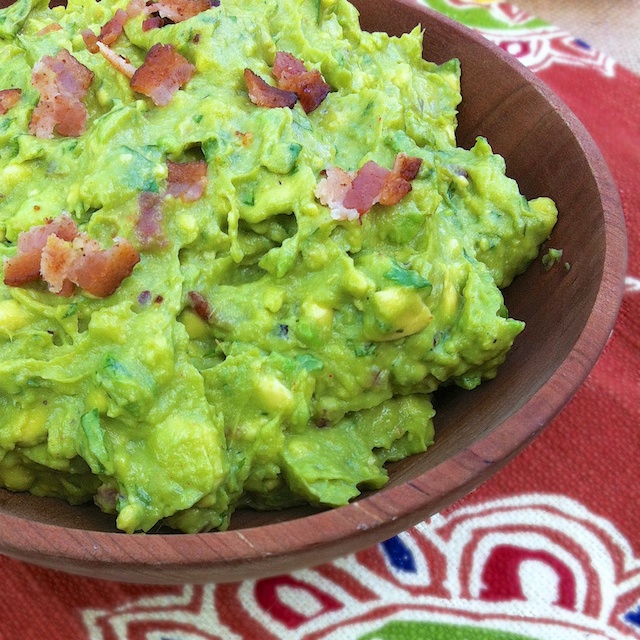 And yes, I am a dietitian that eats bacon. This is a disclaimer Serena and I have to make now and again (even though we like to think our tagline of “Two Dietitians Who Love Food As Much As You Do” pretty much sums it up.) But Desi’s recipe has just two bacon slices for the entire bowl of guac which gives plenty of flavor without a ton of extra saturated fat calories.

I pretty much stayed true to the recipe here – my only switch ups (besides subbing smoked paprika for cayenne pepper – I have a serious thing for smoked paprika) were in the preparation:

Obviously, this is DELISH with corn tortilla chips but I also slathered it on a whole wheat tortilla with some black beans and corn. It would also be a stellar spread for burgers or grilled chicken (or the black bean burgers that I’m posting later this week.)

Are you nuts about avocados or bacon (or both) like I am? If you make guacamole, what do you put in it?

Guacamole, roasted garlic and bacon...three of my favorite things all together in one dish- AMAZING! Roasted garlic is such a flavor bomb, I can't wait to add it to my next batch of guac!

Yep, it doesn't get much better than that! Guacamole should be it's own food group ;)

[…] Check out the recipe for Bacon & Roasted Garlic Guacamole. […]

What a wonderful recipe! I definitely will be making this guacamole!