Use your muffin pan to make these mini veggie loaded spaghetti pies – sure to be a new kid and family favorite! 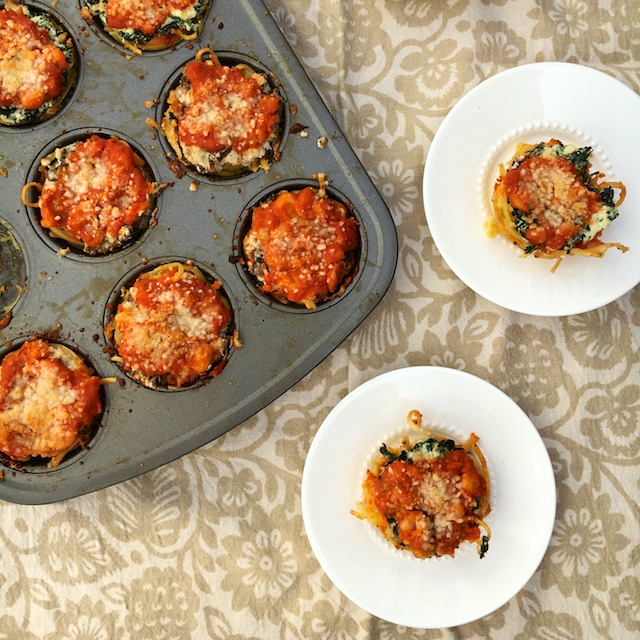 Today’s post is being brought to you by the letter S.

As in Spaghetti and Sesame Street.

One of my most favorite kids’ cookbooks from early on has been C is For Cooking: Recipes From the Street. And just like anything Sesame Street touches, it’s fantastic all around. It was actually authored by a dietitian (#bonus), the pages are colorful, there’s a variety of recipes and the dishes really taste great.

My daughter has poured through the book so many times since she was a toddler, that I bought a second copy because the first was destroyed (even at 8 1/2 years old, she still gets a kick out of it and we still cook from it.)

So, when we announced this month’s Recipe ReDux theme:

It’s Income Tax Season, so our brains could use some easy arithmetic; as in seven-ingredient-or-less recipes. Show us the healthy, no-brainer dish you fix for breakfast, lunch or dinner.

I thought of Big Bird’s Spaghetti Pie recipe – one of the cookbook’s recipes we’ve made often over the years when there was no meal plan and I had to do dinner quickly.

I took several liberties with the original dish to edit it to fit the 7-Ingredient criteria and turn it into our own recipe:

Use your muffin pan to make these mini veggie loaded spaghetti pies – sure to be a new kid and family favorite!

Adapted from Big Bird’s Spaghetti Pie, C is For Cooking: Recipes From The Street Cookbook

Dare I say I like this version even better than the original? You can easily make half of the pies with one vegetable and half with another – depending each family members’ favorite veggie pizza toppings (I did half mushroom and half spinach for my crew.)

Think of this 7-ingredient recipe as a template – you could certainly add different veggies, swap in your favorite cheeses, etc. Use the vegetables you typically like on your favorite pizza or lasagna dish. More variations: 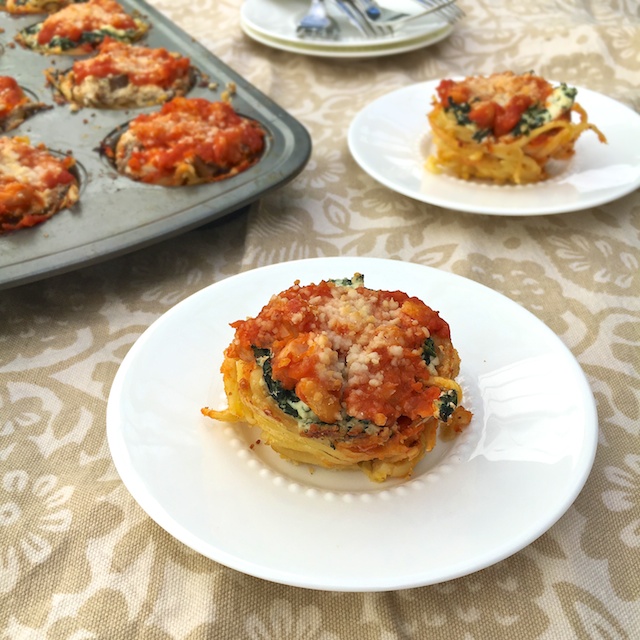 What veggies would you add to these mini pies? What’s your favorite 7-Ingredient-Or-Less Meal? Check out all the short list recipes from fellow ReDuxers below:

I never really thought about it but they are good for eating on the go, out of hand if need be :)

Aren't you too cute?!!! Love these and love your daughter is having fun! I love making food with my kiddo too.

What a cute idea! Even though I don't have kids at my house- I would LOVE these adorable little spaghetti bowls! Plus, perfect portion control for someone who can easily eat bowl after bowl of pasta :)

YES! My daughter got tired of them after the first night and I found they were the perfect portion control fore me :)

This makes me want to nix my lasagna feast scheduled for Easter and whip these up instead! I'm sure the kids would be happy too! I love how they look so personalized too, the perfect way to get everyone around the table to eat their veggies!

I can totally see the little girl I nanny gobbling these up!!