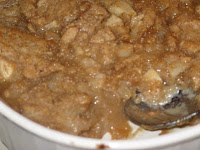 The flavor combo of pear and caramel is glorious. In fact I was just talking to my mom on the phone about it last night. She’s on vacation in Washington and stumbled upon a small little chocolate shop and was offered a sample taste of a rich pear caramel sauce. Upon swooning when she tasted it, she told the owner of the shop that it reminded her of a sauce made near her home in Montana, King’s Cupboard Pear Cinnamon Caramel Sauce from Red Lodge. The owners response surprised Mom, the sauce was in fact the same sauce from King’s Cupboard that the Washington chocolate shop found to be so delicious and high-quality that they bottled it and sold it under their own label!

Similarly, today in my own kitchen, I was surprised to discover a swooningly delicious pear caramel sauce from a rather astonishing source. 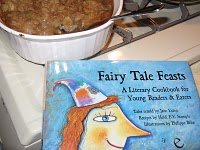 You may remember that I mentioned a Pear Grumble in my list of to-make pear recipes. I was fascinated by the name “grumble”; I’ve heard of fruit slumps and bettys and of course, cobblers and crisps. I was also intrigued by the recipe directions which described mixing up a cobbler-like dough and then folding in the pears, followed by pouring boiling water and melted butter and brown sugar over the whole grumble. Amazingly, I found the recipe in a children’s fairy tale book that I happened to pick up for my five-year-old. She loves fairy tales from around the world and she enjoys cooking. The book combined both her loves: Fairy Tale Feasts: A Literary Cookbook for Young Readers & Eaters; tales retold by Jane Yolena and recipes by Heidi E.Y. Stemple. Recipes accompany each of the delightful stories in the book. The grumble story was The Magic Pear Tree tells the story of a wandering poor Chinese priest who asks for a simple pear from a miserly farmer. The farmer refuses, but the priest is finally given a pear by a town guard. The priest eats the pear and then with the seeds proceeds to grow a magical pear tree and then distributes the fruit to townspeople. The greedy farmer is left with nothing.

My two-year old did an amazing job of dicing the pears with her kid’s knife after I peeled, cored and sliced them. While she took eons to dice, I mixed up the recipe which I adapted to include nutty whole wheat flour, more pears and spice, and less sugar and butter. 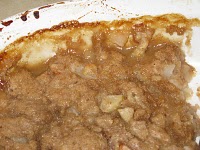 The recipe is actually entitled “Magic Pear Grumble.” And not only does it magically produce golden brown bready tufts atop thick syrupy spiced pears (thanks to the ‘magic’ ingredient of the hot water poured on top before baking,) but the amazing buttery pear caramel produced around the edges of this Grumble is cause enough alone to run to your kitchen and start creating some fairy tale magic. (Make certain YOU get an edge piece!)