You can see all our Healthy Kitchen Hacks here. To get exclusive healthy kitchen hacks – only available to our email subscribers – sign up HERE.

How To Open a Coconut (Without Special Tools)

This week’s hack came about after an impulse purchase at our new Whole Foods store.

While picking up some bananas, I pointed out a coconut to my 10-year old daughter and told her to shake it. She seemed dubious when I told her there was water inside so I figured “let’s make a lesson out of this” and we purchased a few. 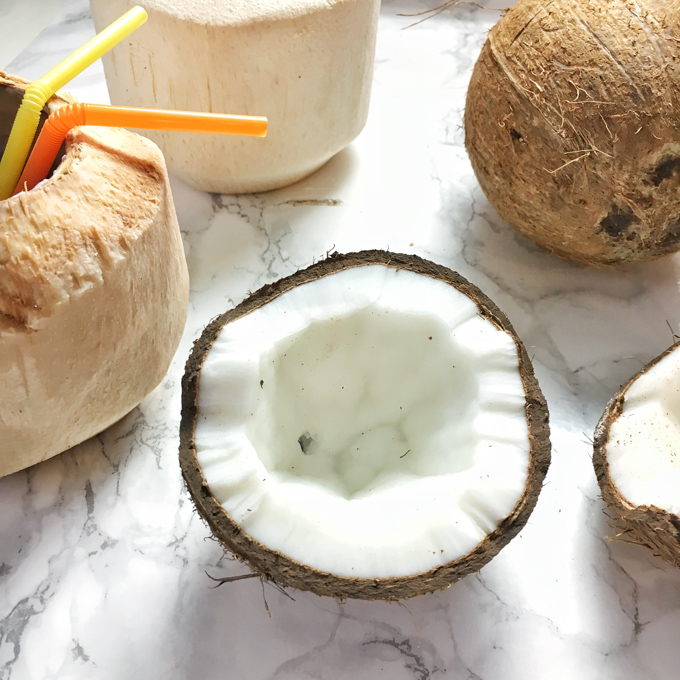 Before trying to open it, I watched dozens of videos on how to open young and mature coconuts (there’s a difference??), using machetes (uhhh, definitely don’t have one in the garage), hacksaws (#justno), specific coconut scrapers (I’m NOT buying another one-purpose kitchen tool) and cleavers (scary.)

But after several coconut opening sessions later, I’ve now pretty confident on how to open both kinds of coconuts and the “easiest” ways to do so with tools I’m sure you have on hand. 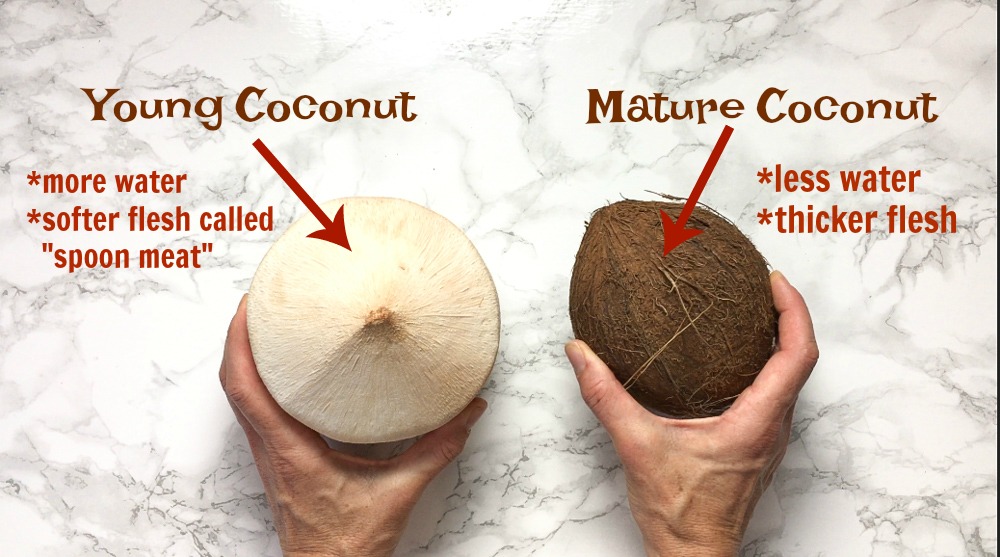 These guys mainly come from Thailand and the outer hull is shaved so it’s smooth and the top is shaped like a cone. These are FULL of water – so much so that you might not hear it when you shake them because they are so full. The meat inside is gel-like and soft – it’s called spoon meat.

1. Put the coconut on its side and cut the outer hull off, cutting down the sides of the cone end. Go around and keep “shaving” off the white part until you see the dark husk underneath. 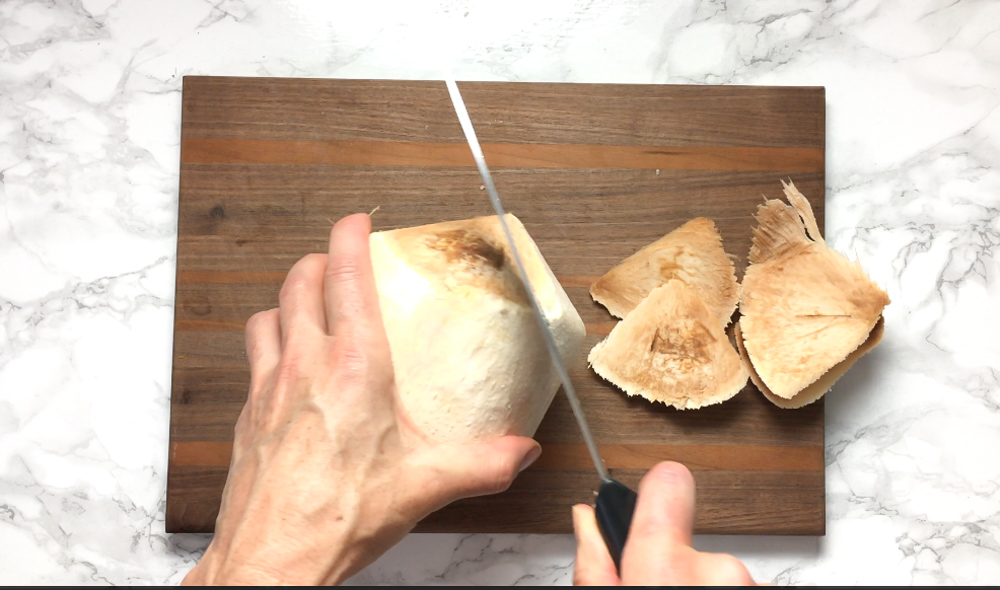 2. Put coconut upright. Carefully but firmly, jam the tip of your knife into the exposed top base of the cone, pressing sharp part of blade away from your thumb. Maneuver the knife inside the coconut and wiggle it back and forth to widen the cut. (Note: some water may slosh out so you may want to drain some off.)

Do this a few times until you have enough of a slit to push your knife in further and pop off the “lid.” You can also try to pull the top off with your hands as the skin is pretty thin. 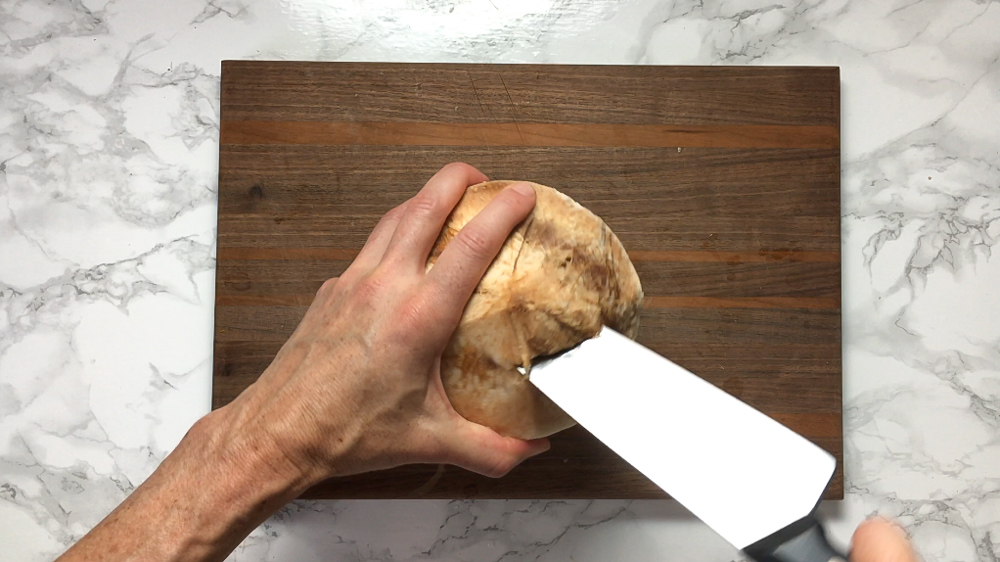 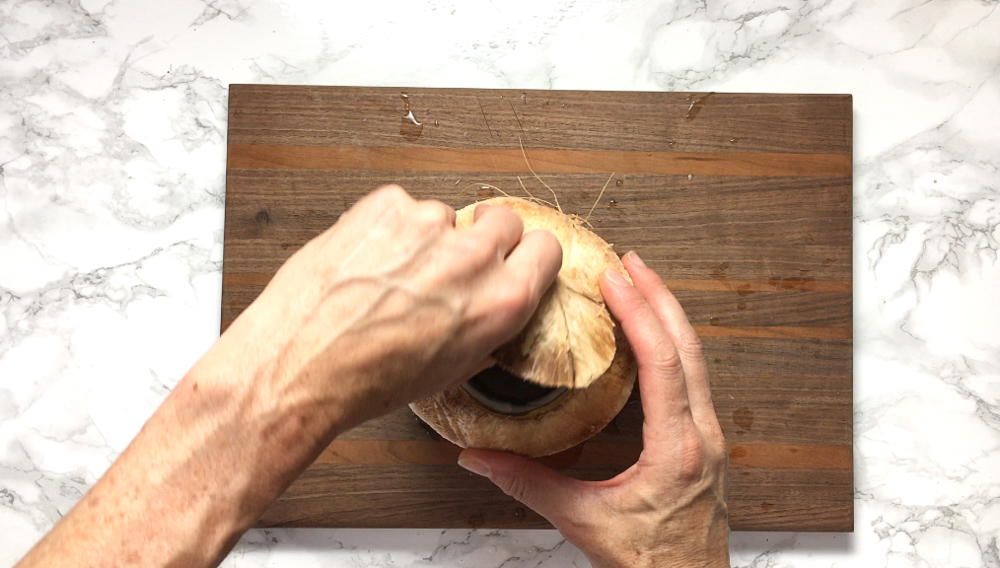 3. Drain the water (or drink it right out of the coconut!)

4. Scoop out the meat with a large spoon or ice cream scooper. 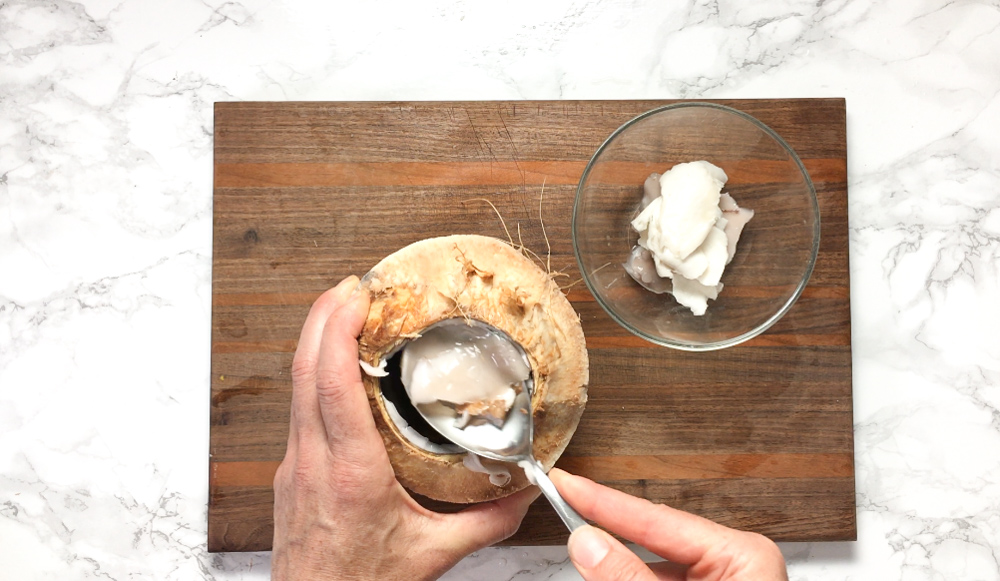 These are the sterotypical coconuts you’ve seen on Gilligan’s Island and in cartoons. They don’t have a lot of water (you can hear it sloshing when you shake it) but the meat is harder and thicker.

Coconut water provides several vitamins and minerals including potassium, magnesium and Vitamin C. It averages about 45 calories per cup which is less than other natural beverages (like fruit juice) but still, it shouldn’t replace all your drinking water in a day as the calories can add up.

Enjoy coconut water as is or use as a base for fruit-infused waters, smoothies and soups. Use to cook grains like rice or poach chicken. Recipe inspiration:

Coconut meat (shredded coconut/coconut flakes) is good source of fiber but is made up of 82% saturated fat.

While all things coconut seem to have been given a health halo in the social media sphere, the American Heart Association recently came out with an advisory re-affirming that reducing all saturated fats in the diet greatly lowers one’s risk of cardiovascular issues. So, enjoy the coconut meat in moderation, especially if you have high cholesterol or higher risk for heart disease.

Have you ever opened a coconut before? How do you use coconut water or coconut meat in cooking?

If you have the right tools like a machete or a small hatchet you can do it simply by tapping on the top. Really easy to do, you should be careful though.

Hey, great post! I have never tried opening coconut at home yet, but I will. It will take me many tries at first, but I hope I can do it :P

You made this look so easy! I don't know what I was doing wrong- haha!

This is after MANY failed attempts - ha!!