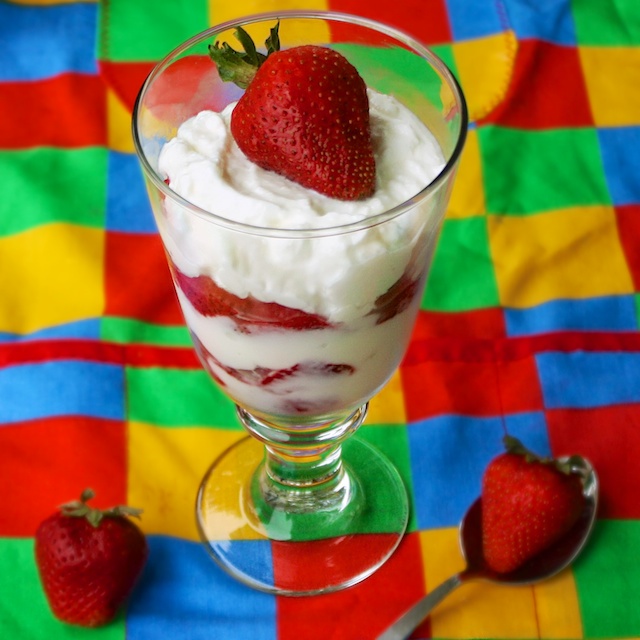 During my years of grad school in Boston, I lived with a flat mate, Amy, who cooked a little but mainly lived on canned beans, noodles, jarred tomato sauce and an occasional piece of fish cooked in aluminum foil. So I almost dropped the phone the other day when I was chatting with Amy and she nonchalantly mentioned that she now makes homemade yogurt weekly.

I’ve been seeing a lot of the homemade yogurt recipes on Pinterest lately, but clearly if Amy is making it “weekly,” and I NEVER have, I am way, way behind the times.

So I hopped right to it.

Below are my reviews of two different recipes. In the first recipe, I used the recipe-specified whole milk, but you could easily swap in 2%, 1% or fat-free – realizing that the texture would obviously not be as creamy – but the fat content would be lower. For the second recipe I used fat-free milk with only 1 cup of whole milk added. Greek yogurt is generally thought to be very thick yogurt with the watery liquid whey strained out; because most of important nutrients in milk are concentrated, a smaller serving is higher in protein than regular yogurt. (See nutritional info below.) I refer to the following as Greek-style yogurt – because I tried to strain it for several hours so it would get thick; but you could easily make regular yogurt by straining the mixture for a shorter time and mixing it to incorporate the liquid.

This Homemade Greek Yogurt recipe is actually for quark – a soft cultured cheese made by fermenting milk plus buttermilk. But since the instructions are similar to many homemade yogurts – but MUCH simpler, I decided to give it a whirl. (In my opinion, it can still be considered yogurt because some dairies use the same culture – Lactobacillus bulgaricus – in making cultured buttermilk as is used in yogurt; however, unlike buttermilk, in most yogurt, more than just one culture is used.)

I followed the directions exactly – except I distractedly scorched the first batch of milk. (Watch carefully!) The fact that milk sits on the counter (unrefrigerated!) for a good 8 hours did give me pause, but I’ve been around enough cheesemakers to know that good flavor-making bacteria doesn’t grow well at 40° F (refrigerator temp!) 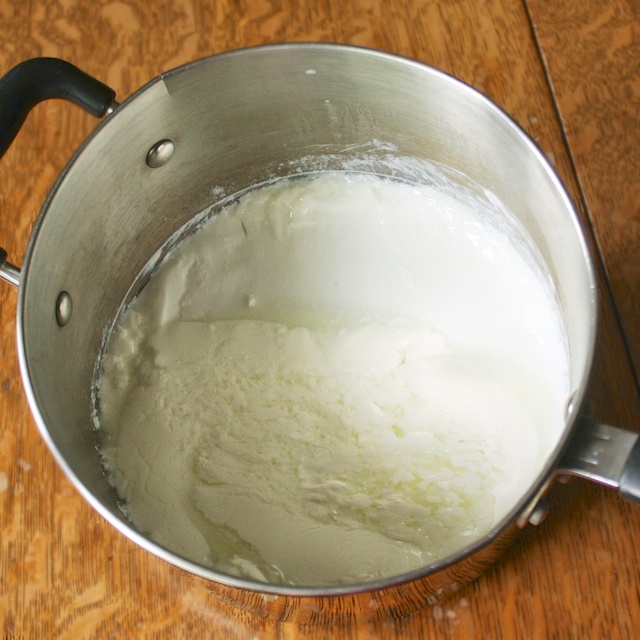 Taste
Rich; a lovely slightly tangy yogurt cheese with the flavor of buttermilk
My husband said: Tastes like cottage cheese or sour cream.

Texture
Soft and velvety from whole milk; delightful.
Strain longer than directed in the recipe for a thick Greek-style yogurt consistency.

Yield
1 cup of product from 2 ½ cups of ingredients were not worth the effort – even though the effort was minimal. Next time I’ll make a double batch. (And I WILL make this super easy recipe again!)

I chose this next Homemade Greek Yogurt recipe because a slow cooker reduces nearly all chances of scorching the milk. However, my slow cooker took nearly 6 hours to heat the milk (on low setting) instead of the suggested 2-3 hours. Luckily, this recipe appears to be quite forgiving; I know this because I got interrupted during step #2 and the milk + yogurt culture cooled below 112°F. I heated it back up to 120° in the slow cooker – but heated it too high to 150°! Luckily I didn’t kill all the cultures and the yogurt still turned out delicious. 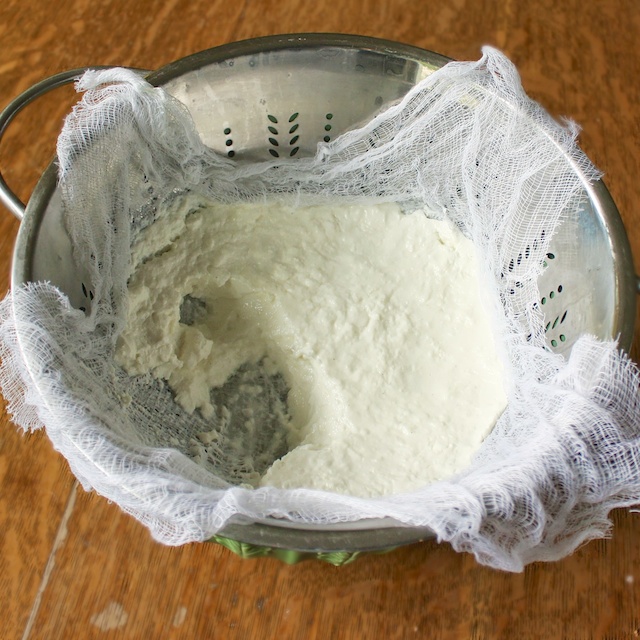 Taste
Use a plain yogurt you like to add the cultures; the result will taste just like it – only richer. This recipe is certainly more tangy than the first.

Texture
The longer you drain it, the thicker and more Greek-style the texture it will become; however it will not be chalky like I find some store-bought Greek yogurts. This is likely due to the 1 cup whole milk I added.

One last note. Recent articles have highlighted the challenge of disposing of the whey produced when straining yogurt to become Greek-style. This is cloudy, protein-rich liquid remains when you make these recipes and is actually very versatile. I used it in place of milk in a muffin recipe and in smoothies. Next time, I’ll freeze it in ice cube trays and throw it into smoothies for added protein. It tastes like tangy yogurt – a flavor that’s commonplace in smoothies.

Bottomline: I will make both recipes again depending on the taste I’m after – and how much time I have on a certain day! Please tell me which recipe you like better or what sorts of adventures you had making either recipe!

10 Surprising Ways To Use Your Slow Cooker - Real Mom Nutrition

[…] Ever wanted to try yogurt in your slow cooker? Serena at Teaspoon of Spice gives you two recipes for homemade Greek yogurt (plus helpful pointers) here. […]

[…] trying this: How to Make Homemade Greek Yogurt via Teaspoon of […]

The whey strained from yogurt can be used to ferment other foods though. Don't throw out that whey!

So I wouldn't be saving the yogurt whey and adding it to anything unless you really like the taste/trying to get extra carbs.

Thanks Jon. I will have to ask an expert...unless you are one? Do you work as a dairy scientist? Stay tuned! And thanks again for your comment!

Homemade greek yogurt is the best. I always make greek yogurt in my crockpot. But I set it on high. For a gallon it takes about 4 hours and about 2 for a half gallon. Maybe try turning it up to high. I have never burned mine.

You're a gem for sharing your experience! I will try on high heat next time...which will be soon!