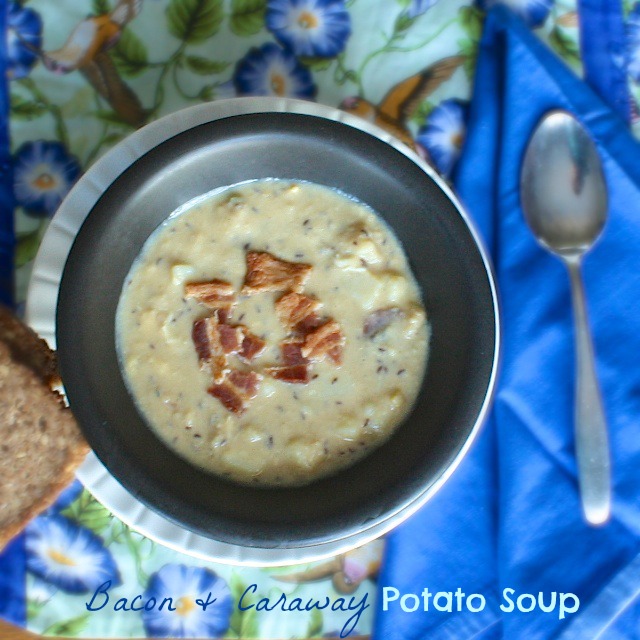 I couldn’t resist. A friend placed a vintage cookbook before me – and even though the food at the birthday dinner party I was attending was fabulous – and even though my kids were asking for a second enormous slice of decadent chocolate caramel birthday cake, I was oblivious. I was lost in the blast from the past cookbook. (Really, I was, it wasn’t until later that the kids told me later their request had wisely been refused by the smart host.)

This particular vintage cookbook was simply The Hungarian Cookbook, circa 1940, and given to my friend by a farmer friend who likes to drop off small bags of paprika at her home on any given Sunday. While I have dined at plenty of traditional Polish and Hungarian (or “Old Europe”) style restaurants in Chicago, none had many of the dishes found in this cookbook. One interesting one which caught my eye was simply “Caraway Soup.” 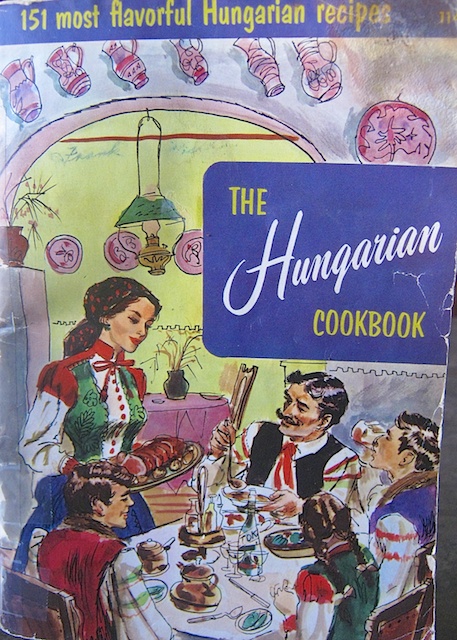 Below is my take on the simple soup. I added milk, onions, potatoes and bacon – because an enriched caraway broth didn’t sound quite as appetizing as it would be with bacon. (Isn’t everything better with bacon?) I skipped the fussy step of straining out the caraway seeds by adding a few less than the recipe specified. And I added whole eggs instead of egg yolks only to bolster the protein content (and because my kids love the little egg ‘noodles’ formed when adding hot egg whites to soup, which I often do.) The kids and I both adored this velvety soup with sweet caraway flavor and salty bacon…so much so that we ate it all before my husband got home!

Bacon and caraway jazz up this velvety potato soup – which is actually low-fat, thanks to some simple tricks.

Do you make potato soup? Do you ever eat Hungarian food?

Thanks Clara! So glad you liked it! I'm making it again this week too!

I sure saved this one in a hurry, I can hardly wait to try it. especially on these below zero days.

It will warm you up for sure! Good luck with the cold...ugh!

I usually just end up coveting when I come here, but I think I'm really going to have to try this one!

Well good! Which version, mine or the original? (;

Love potato soup but I couldn't tell you the last time I ever ate Hungarian food. Your soup looks delicious and I am in love with the cookbook cover-so fun!

Thanks EA! Yes, back in the day, I'm sure everyone was as happy as these folks eating Hungarian food! (: