This grazing board is perfect for easy entertaining – here are tips for making a sunny Mediterranean Picnic Plate that looks as delicious as it tastes. 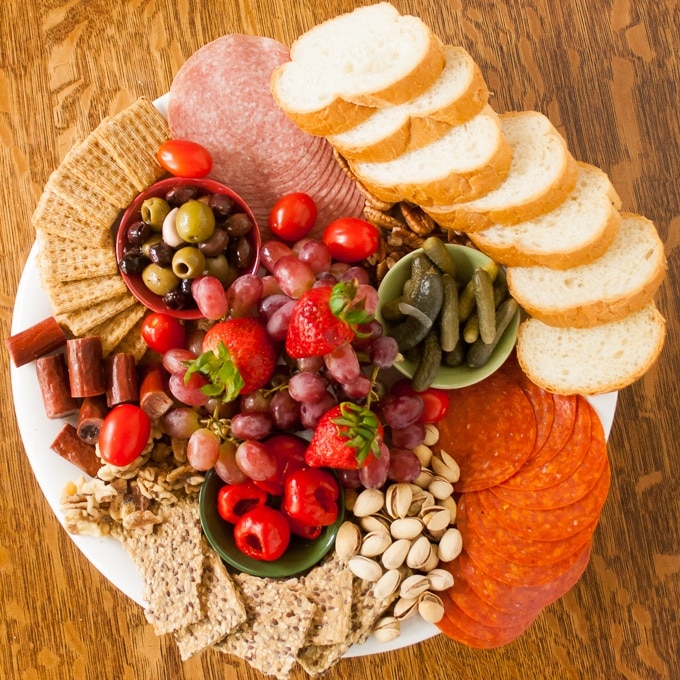 I partnered with The North American Meat Institute (NAMI), a contractor to the Beef Checkoff to write this post. Thoughts are my own – and as you know, I’m a long-time beef fan.

The person who taught me how cured meats fit into a Mediterranean Diet was an Italian chef. Chef Lorenzo grew up in Bologna, Italy, and really ate the Mediterranean way.

Growing up, Chef and his family ate surprising simple meals: pasta with whatever vegetables were in season (cliché but true!), sandwiches of cured meat, and fruit for dessert.

These Italian cured meat sandwiches weren’t really what we Americans think of as a “sandwich”. Chef Lorenzo’s mother made sandwiches for him that were always more bread than meat.

His favorite sandwich was made with big hunks of crusty bread and several thin slices of Bresaola, a cured beef product. Bresaola is cured in the traditional way with just salt – and then is aged for about two months. Chef says he has a hard time finding it in the US – but when he make his yearly trip to Bologna, he always has this sandwich.

Lucky for me, the chef made me a similar sandwich. I snapped a photo. Note the proportion of bread to meat below. 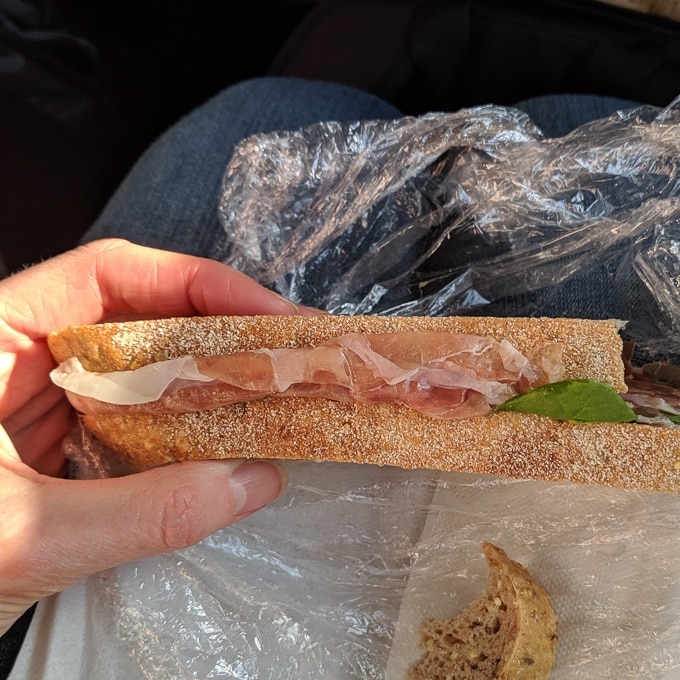 But it was such a satisfying sandwich: the yummy salty, umami, tangy cured meat with the thick slices of whole grain bread, and a few leaves of spinach.

Chef said in Italy, cured meats are always eaten with bread and vegetables – usually a sandwich with a salad or other veggie on the side.

And apparently, my Italian friend isn’t the only one who eats this way. According to studies evaluated by the 2015 Dietary Guidelines Advisory Committee, followers of the highly regarded Mediterranean diet eat twice as much red and processed meat than followers of USDA Food Patterns. [1] In Mediterranean regions, the same traditional practices of curing and preserving meats – that are centuries old – are still used today. Meat processing began out of necessity before refrigeration by salting and drying as a means of preserving products and preventing spoilage. 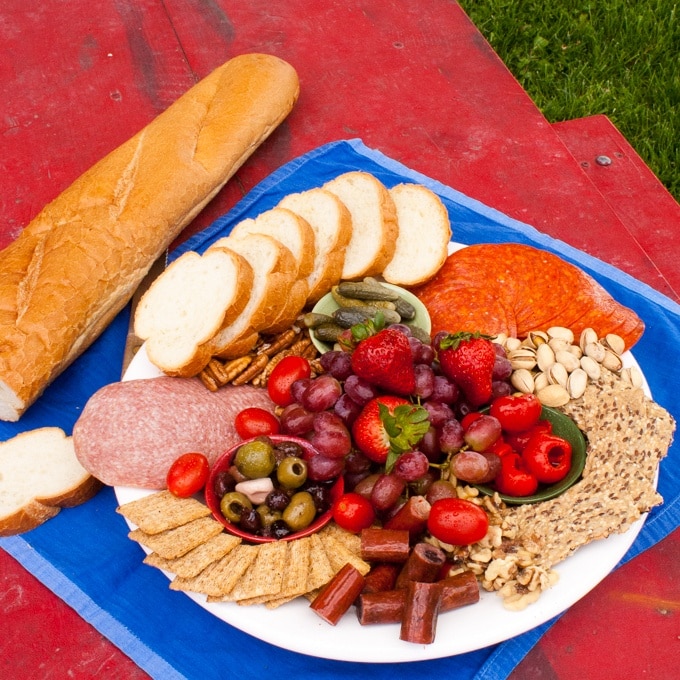 Cured and prepared/processed meats eaten in the Mediterranean area that are also available in the US include:

Sandwiches are great. But summer is here and so are lots of friends and relatives. So it’s a lot easier for me to just set out this Mediterranean Picnic Plate for snacks – or as an easy appetizer – or my kids’ new favorite dinner! 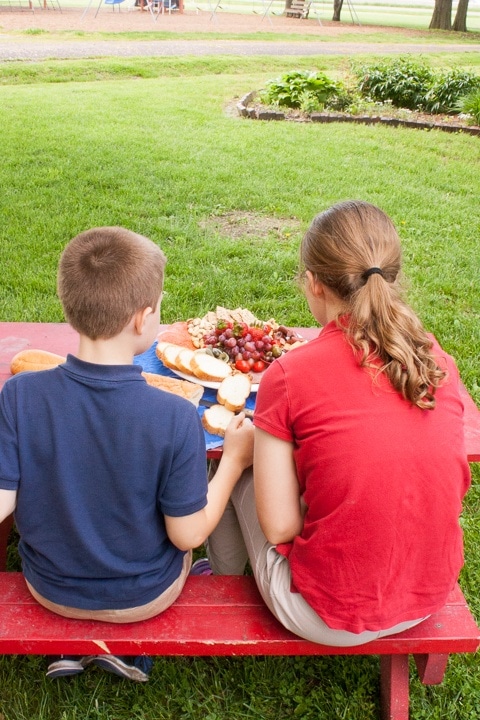 That’s how you can make this Mediterranean board. It starts with lots of veggies, thick slices of bread with whole grain crackers, and a variety of salami, pepperoni and meat sticks. And you have a lot to choose from. Thousands of products are available in the meat case and include low- and reduced-sodium products, low- and reduced-fat products, American Heart Association certified, organic and grass-fed options, Kosher and more.   A range of AHA certified prepared products can be found on the nutrition website: http://www.meatpoultrynutrition.org/productcenter.

The person who taught me how to put together a beautiful board is my friend Robin, the owner of Board Mama – a catering company that specializes in boards. Here are some board-assembly tips from Robin to help you:

Let me know if you have been making board dinners lately? Do you have a favorite cured/processed meat? 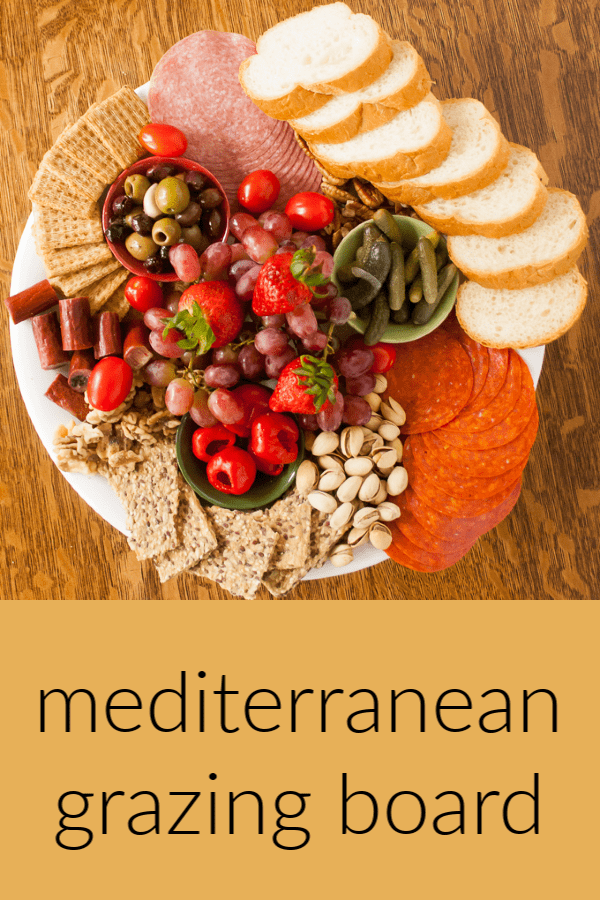 This is beautiful and perfect for a warm summer evening meal! Pinning it for future reference.

Thanks Marie. Yup this board + some wine + and a summer evening = happy place!

Beautiful grazing board, filled with lots of yumminess! I've never tried Bresaola before, but it looks delicious! I think I need to make my own grazing board for dinner soon-love your ideas for putting one together!

Thanks EA! The grazing board for dinner is seriously the way to go: happy kids, happy mom. (: