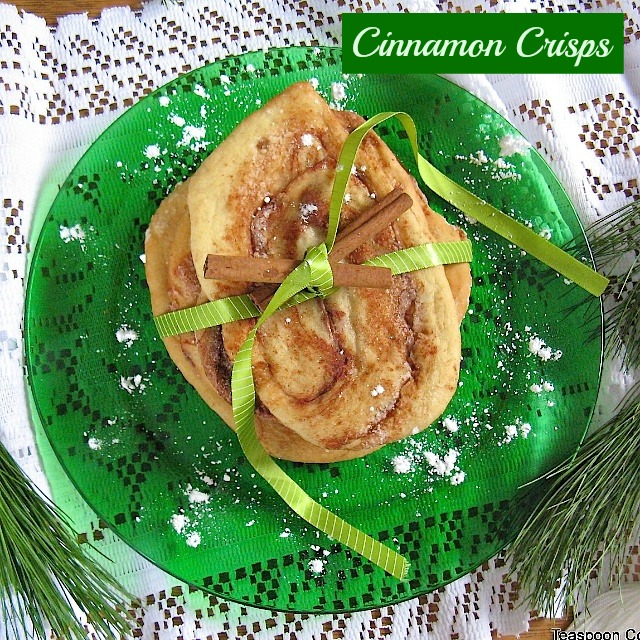 One of my favorite baking challenges is to thumb through my collection of community cookbooks until I find a recipe I’ve never before seen or tasted. There are never descriptive photographs in these books. Upping the ante even more, all ingredient lists and instructions are of course written in the home cook’s (often less-than-complete) hand without the helpful additions or instructive tips of an editor. All of these challenges aspects were found within a recent recipe gem called Speedy Cinnamon Crisps. 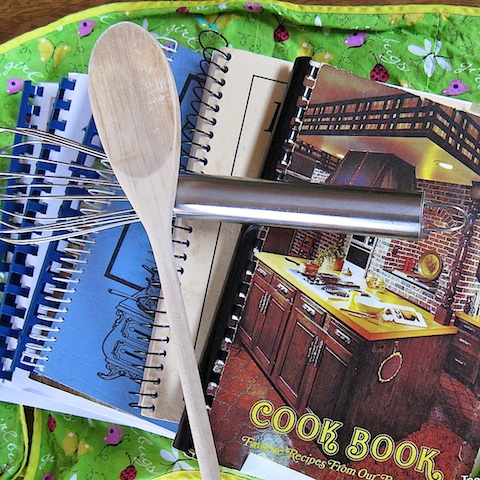 Perusing a collection community cookbooks is a fascinating window into true regional cookery around this country; and even a glimpse into different eras. My cookbook collection includes those from churches, Junior Leagues, county homemaker clubs, and community organizations like Grange and the Montana Cattlewomen. A favorite is from the dear ladies of St. Paul’s Lutheran Church in Brookfield, Illinois and was published in 1975 with recipes like Date Pinwheel Cookies and Cottage Cheese Rolls. Theirs were the recipes I grew up on – with subtle differences, since they were German immigrants in Illinois and I descended from French Canadian cattlewomen in Montana. Community cookbooks are a wealth of cultural family recipe. Similar recipes coming out of 1970’s era Illinois and Montana kitchens included cheese balls (which I still love to make this time of year – with a few updates) and mock apple pie.

A day ago I was scanning through the ‘Cookies’ section of the River of Life cookbook from Glendive, Montana, I came across a recipe for Speedy Cinnamon Crisps. I read through the recipe once and was completely lost. I read through it three more times before I understood the meaning of the cryptic instructions. (I love feeling like a sleuth trying to uncover the meaning of cooks’ language from my mother’s or grandmother’s era!) Bottom line: Cinnamon Crisps was a recipe for classic cinnamon rolls; but right before popping the raised rolls in the oven, you roll them as flat as pancakes and then bake until crisp, but pliable!

I had my 76 year old German neighbor over yesterday and gave her a stack of the Cinnamon Crisps. I wanted to know if she’s ever seen a similar recipe. She loves to bake and has given me my absolute favorite oatmeal cookie recipe. But she had never seen a cookie like the smooshed cinnamon roll. So, I became even more excited to have uncovered this sweet (but not too sweet,) cinnamon-rich, yeasty, salad-plate-sized gem that would be perfect for Christmas brunch or a mid-morning cup of tea.

These delightful cinnamon crisps are like a flattened cinnamon roll baked until crispy. A terrific cookie for the holidays. 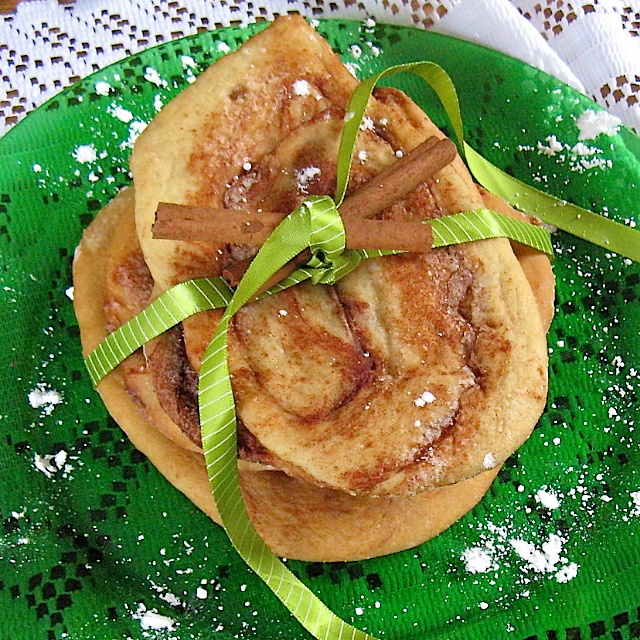 I used to make these, just like this, many years ago. I recently had a yen to have them again (for the grandkids) Your recipe is identical to the one I lost. Sometimes I would add chopped pecans to the filling, sometimes raisins. I prefer them plain, tho. Thanks!

Oh boy! I love the idea for adding raisins. It totally makes my day to hear your story about the 'found' recipe. Thanks so much for taking the time to share!

I was a big fan of these from the bakery section at various grocery stores, for years, in VA, OH, and IA. Then I moved to WA and later CO and neither state had them in stores...until one day I went into a Safeway where I don't usually shop and they had them. I about lost it right there in the bakery section! I ran to the counter to ask the man if they normally carried them or if this was an unusual item...he said they always had them. He was baffled as to my excitement and informed me that they're nothing but "squished cinnamon rolls." I just stared at him for a moment. And then left with my four plastic boxes of crisps. I was interested to confirm what he told me, so thank you for posting this, and for the recipe! Now I can make my own and it won't matter WHERE I live!! (I'm so addicted...)

Julie I so appreciate your story. Hearing from readers who take the time to tell a story is absolutely the very best part of blogging. THANK YOU for sharing! I'm so interested to hear the states in which you found the Cinnamon Crisps. I've actually never found them here in IL. But I should check MO, now that I live closer to St. Louis. Thanks again for taking the time to write! (:

Anything Cinnamon and I'm in! These look beyond delicious! Can't wait to try them! :)

Thanks An! They're super easy to make! Fun too....I love sprinkling sugar and cinnamon on anything too!

I've got to try making a gluten-free version of these-they look so yummy! Love your story about your community cookbooks, and how nice to be able to share with your neighbor! I live in a great neighborhood with families and neighbors of all ages-we had a block party this summer and it was a blast!

Thanks EA! Love your story about your neighborhood! It's it fun to talk recipes with folks from all over ...and all ages! (: