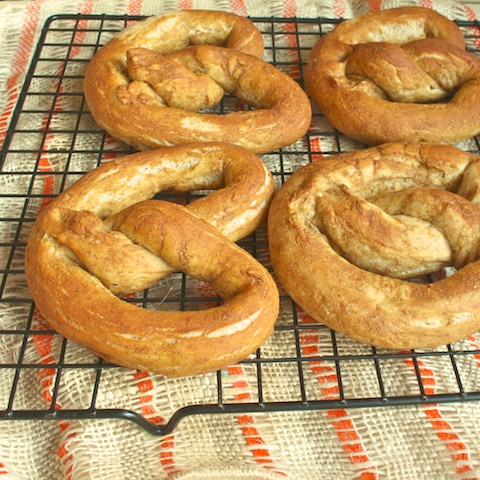 I’d been looking for a good excuse to make ‘authentic’ homemade soft pretzels ever since I saw this photo in the Chicago Tribune. The food section of a newspaper is not normally the spot you see rubber-gloved-hands dipping dough in toxic chemicals! I was fascinated by the paper’s discussion of the different washes that can be used to give pretzels the golden brown color and sour-tangy taste: Lye (for which rubber gloves are used,) baked baking soda, regular unbaked baking soda, whole egg, or egg white. So now, thanks to the First on the First recipe challenge, I have an excuse to try my hand at making homemade pretzels…and a recipe containing mention of rubber gloves for something other than de-seeding a chili pepper!

With one sleeping toddler and one 4 year old child eager for a project, a block of time emerged – and I knew this might be the only chance I’d have to spend 1 hour and 20 minutes plus raising time to complete Project Pretzel. Thus, I did not rush out to my local kitchen supply store to purchase lye; instead I used the baked baking soda wash as I’d read that the flavor was “somewhat similar to lye, but the color isn’t as dark or shiny, and the crust isn’t as crisp.” Upon completion of the project, I would agree that the color was more of a dark golden color (see comparison photo below) – and it’s also none too shiny. 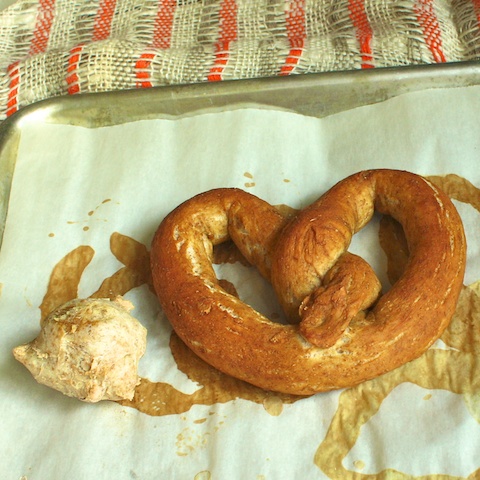 The flavor was classic pretzel and the crust was mighty crisp straight out of the oven. Just make sure you have an extra box of baking soda in the cupboard – most of us who bake don’t often have a whole 1 1/3 cup of baking soda left in the box. By the time you’re done mixing the dough (especially with the help of a 4 year old) and letting it rise, the baking soda will be done baking. I baked mine at 300° for 1 hour. 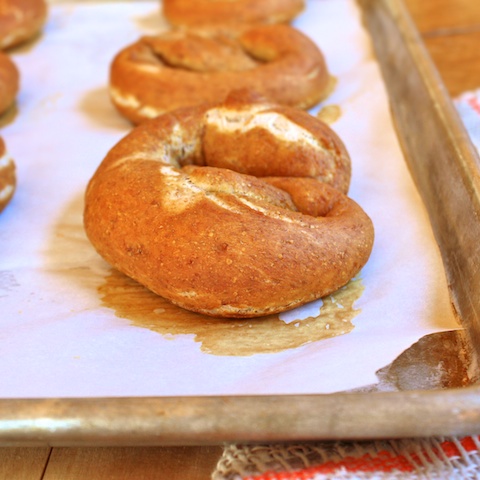 You must use rye flour as specified in the recipe; the flavor is lightly pumpernickel and unmistakably authentic pretzel. I used Bob’s Red Mill Organic Whole Grain Dark Rye Flour. And then, because I didn’t have any of the called-for bread flour, I used 2 cups of whole wheat flour and 3 cups of all purpose flour. The result was deliciously hearty and nutty; I figured it was an ‘authentic’ whole wheat pretzel. To recap, the only changes I made from the original recipe were to switch out the bread flour and to cut the salt to 1 ½ teaspoons; instead of 12 pretzels I got 14 – and that doesn’t include the unbaked pretzel the toddler snatched when he awoke – so the recipe probably makes 15! 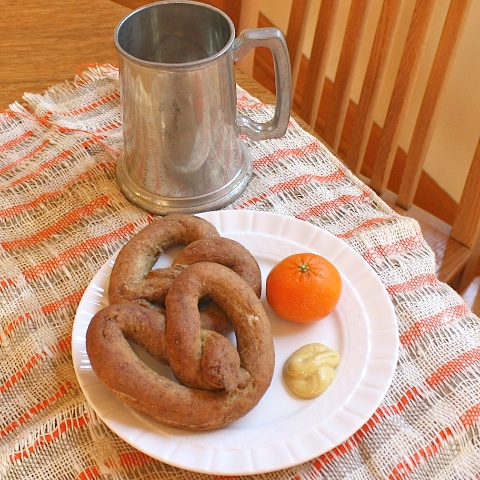 Such yummy looking pretzels! This would be a fun summer project to make {a gluten-free version} with my kids this summer. Well done!

Please come back and tell me how the #GF project turns out!!

Yes, I think the rye flour really made them taste authentic!

Thanks for another fabulous theme Kate!

Mmm, aged cheddar and beer are definitely a must (except for with the one I'm eating for breakfast :)). I used regular unbaked baking soda and an egg wash and my pretzels got VERY brown, I was worried I'd done something wrong, so I'm glad to hear that's the goal :) Great job!

Funny! I ate mine for breakfast too!(: