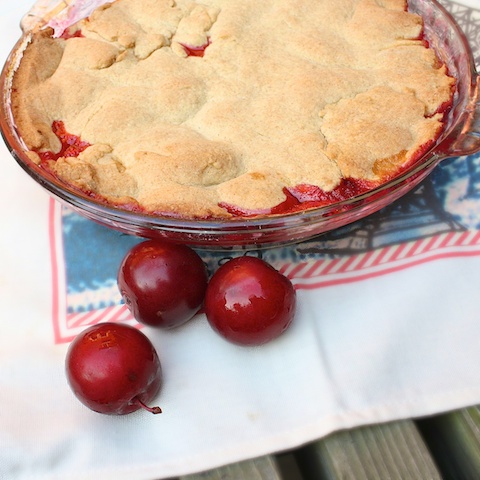 I’ve been wanting to write this post for a while now; almost a year and a half. It’s about how I traveled back to the small farm community where I grew up and attended a funeral. My uncle’s death on our ranch was tragic – and it continues to remind me of the risks involved in the agricultural production of food for our country; my dad and his brothers produced beef cattle on our 1,200 acre ranch in Montana. While the occasion of the trip to our old home was very sad, the outpouring of support from the tiny community was astounding – and just one small piece of that provision for our family was a pot luck banquet after the funeral. And surprisingly, a plum pie on the pot luck table was an indication of how little some things in this place had changed since I was a little girl.

When I was growing up, my parents planted a huge garden. From this garden, we harvested beans, corn and peas that my mom froze for the winter. Potatoes and carrots were stored in our root cellar. And peaches, pears and apples from a few fruit trees were canned. We ate beef from our cattle, and eggs and milk from our neighbor. Once a month, we traveled to the grocery store two hours away for sugar, flour, oatmeal, a few boxes of cereal, and other staples. To this day, there is still no supermarket in this community. 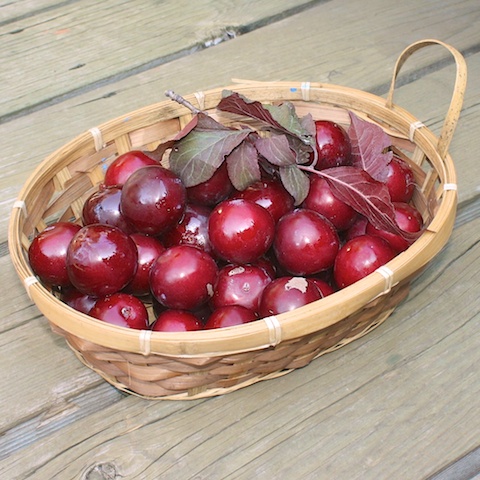 The organizers of my uncle’s funeral luncheon knew there would be a large crowd at the funeral. All the businesses in our small community of 650 had been closed for the day. So nearly every pickup truck (or large Buick) that pulled into hay field (parking lot) surrounding the large community center where the funeral was held contained a man wearing a Stetson and his wife carrying a ‘hot dish’ for the pot luck. When the meal began, I quickly took stock of the pot luck table: Not a single item was wrapped in plastic; there were no veggie trays or potato salads from the local supercenter. EVERY SINGLE dish was homemade. This was of course because there were no other options. No rancher’s wife wanted to drive 2 hours just to pick up a package of dinner rolls. Instead, there were numerous hamburger or chicken casseroles, pots of baked beans, baskets of muffins, salads of canned veggies (no spring gardens were growing yet), ubiquitous Jello desserts, pies, cakes and cookie bars.

I didn’t get a chance to dine on much from the pot luck table. There were just too many old friends to catch up with. But I did spy a beautiful plum pie. It was beautiful in appearance as I’m in awe of anyone who can make a double-crusted pie; but it was also special because I knew those plums were probably the last of someone’s plums that had been carefully frozen the summer before and that they were sharing these gems with us. I enjoyed every bite of pie and was touched by the warmth of a whole community. I’ve wanted to make a hearty plum pie ever since.

So a few days ago when a neighbor’s plum tree was ripe, my kids and I didn’t hesitate to ask to pick a few. I adapted this recipe from Relish Magazine. And while the appearance is this plum pie is of a one with a double-crust, the result was much easier and was just as satisfying the one I remember from the pot luck table over a year ago. 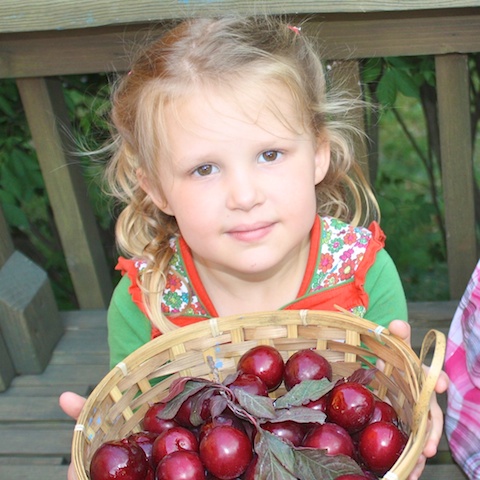 A hearty, but easy “double-crusted” Plum Pie, and the heart-warming story of a small community pot luck. 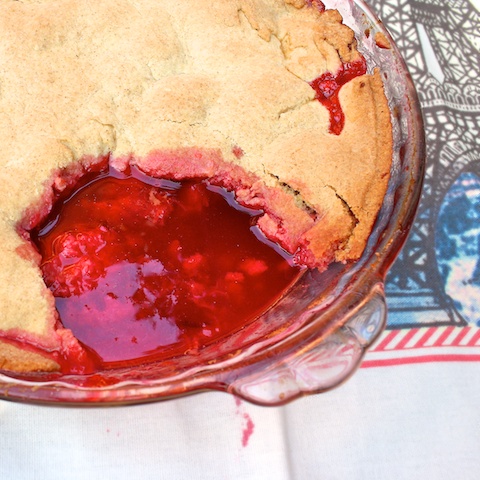 I come by every now and again to read this. Still makes me cry to think about that day and the big love we got from this little tiny town. There are some things your heart just never forgets.

It was one of the things I'll never forget, Tiffany!

So sorry to hear about your uncle, but thank you fo sharing. Theres something special about small tight knit communities. I absolutely love plums but never think to bake with them for some reason. Lucky you to have a neighbor with a tree! Your pie looks delicious!

I grew up about 2 miles from Richard and Diane. They were a huge part of my growing up in Lonepine. I always remember the smile on Richard's face and hugs he would give. Diane was my driver's ed teacher. She would tsk us for driving in to driver's ed. She took us to Kalispell, Coulumbia Falls, Polson, Missoula, Plains, and everywhere inbetween. When my dad passed away we had the same outpouring from the communities. Such a great place to grown up. He will always be missed.

Oh I'm so glad you stopped by Kris. And THANKS for sharing your memories! It means a lot to hear them!

I'm sorry for your loss--it must have been so moving to see the community rally around your family like that. Living in suburbia, I often forget that there are places where supermarkets and Target and malls are an hour or two away. Maybe you forego some conveniences living in a rural area, but the close-knit community makes up for it.

I just adore plums, but for some reason I've never baked with them--definitely need to remedy that this summer!

Thanks for stopping by Kiersten! I'll be 'visiting' you to find out what you make with plums! (:

Such a similar story could be told for my grandfather's funeral, now more than a decade ago. In the tiny community where my Mom grew up (and she now has returned), there were grocery stores in much closer distance. But frankly, the folks who occupy this small rural Alabama town, for the most part, don't have the financial resources to make multiple trips "into town" during the week.... nor do they value, as you say, the veggie tray topped in plastic.

My memory of his funeral of an apple cake... we used to talk about that cake for years after he died. PaPaw Jennings was a deacon in his church and the kind of man who worked his way up and down Jennings Road (yes, named for the abundance of relatives who lived in close proximity) daily to check in on what we always called "the poor and shut ins".... basically those in the area who needed a little extra caring for, for one reason or the other. And he was by all accounts a dessert lover... we used to talk about how much he would've enjoyed that apple cake :)

Thanks for the wonderful story & a sweet reminder of someone I miss very much.

Your story is just as touching. Thanks so much for sharing, friend!