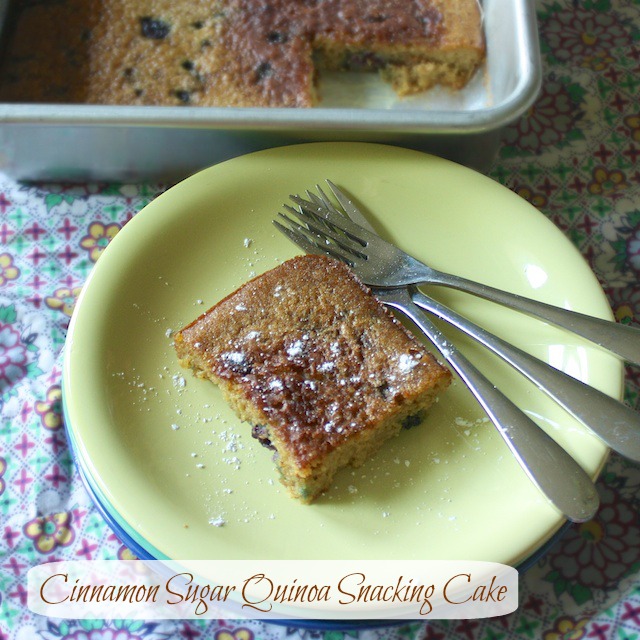 I’ve been intrigued by the chocolate quinoa cakes I’ve seen recently on Pinterest. I mean, adding a sprinkle of quinoa to dark chocolate doesn’t exactly sound delicious – even if it DOES sound healthy.

Not to mention that the cakes are gluten-free; (which is not typically a marker for deliciousness – don’t worry my #GF friends, I come around at the end of this post!)

But these quinoa-chocolate-cake-baking bloggers are adamant that their results are “my favorite cake;” and ‘yummy…even though we dislike sweets!‘ (Huh?!)

So I just had to experiment with a recipe that replaced flour with cooked quinoa – but in baby steps. Instead of going straight to chocolate, I thought the nuttiness of quinoa would deliciously complement brown sugar and cinnamon in what might turn out to be a leaden cake. (Plus I had on my mind the Cinnamon & Sugar Improv Challenge, which is run by Kristen @ Frugal Antics of a Harried Homemaker.) 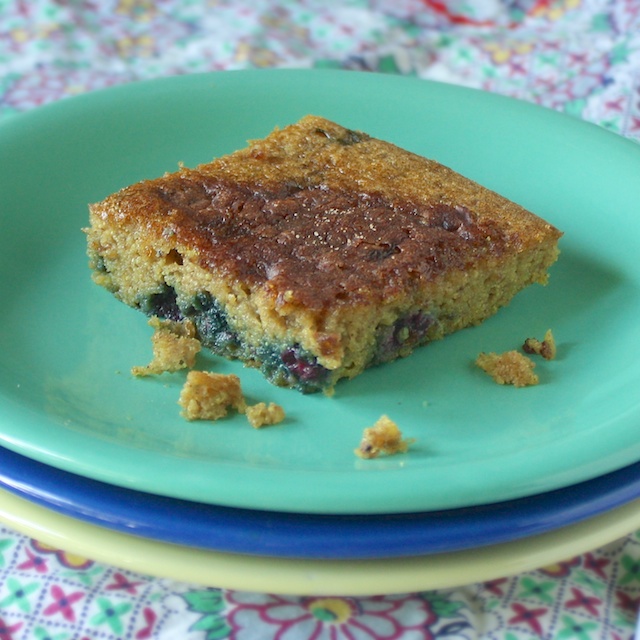 The results were shocking: A light, tender-crumbed cake that was super-duper moist and completely delicious. I will never knock a gluten-free cake again! The brown sugar and cinnamon with the blueberries I threw in at the suggestion of my 5-year-old did produce a yummy cake! While we did decipher tiny bits of quinoa (despite pureeing the quinoa for a good 5 minutes,) they were not unlike chewing on tiny soft tapioca pearls.

The kids and I enjoyed the cake as a snack with a glass of iced tea…and we plan to have it again for breakfast tomorrow with a cup of milk and fruit. The recipe contains four eggs and 2 cups of quinoa, thus I estimate it has:

Perfect for a protein-packed breakfast or snack – this cake is rich in protein from quinoa and eggs. Snack happy and healthy!

Have you ever made anything sweet with quinoa? Please share!

This recipe would work great for a yellow cupcake recipe. It's rather dense, but delicious! You could leave out the blueberries so they don't weigh down the cake. To make it even fluffier, I would try separating the white from the yolk of 2 eggs used in step #4. Mix the yolks in as usual in step #4. Then after all ingredients are mixed, whip the whites with 1/8 teaspoon cream of tarter and fold them into the cake batter before baking. This should lighten the cake so it's more like a cupcake and less like a dense snacking cake.

Can you tell me how much cooked quinoa is needed in this recipe? I usually cook a lot of quinoa at once so it would be easier to just grab the correct cooked quinoa amount from there. Thanks so much! Been looking for another cooked quinoa cake recipe other than the ubiquitous chocolate cake.

Great question Cecilia. Two-thirds cup dry quinoa yields about 2 cups cooked quinoa. So when you're making the cake, put 1 cup cooked in the blender with the milk and blend. Then add the remaining 1 cup cooked quinoa to the blender (with other ingredients) according to the instructions. Thanks for stopping by!

Can this recipe be made with flax and almond milk and no butter, for a vegan version?

Yup! You could use vegan milk beverage and oil instead of butter! Good idea!

I do not have a food processor, will a blender work? It looks so yummy trying to cut all of the junk out of my diet to lose weight and get healthy but still crave a little sweet now and again, would love to have something that looks this good.

Good call Amanda! I edited the recipe to include instructions for blender. You could certainly use a blender instead of food processor!

I only thought of quinoa as savory. Thanks for introducing it this way to me. I am glad that you participate in the Monthly Improv Challenge!