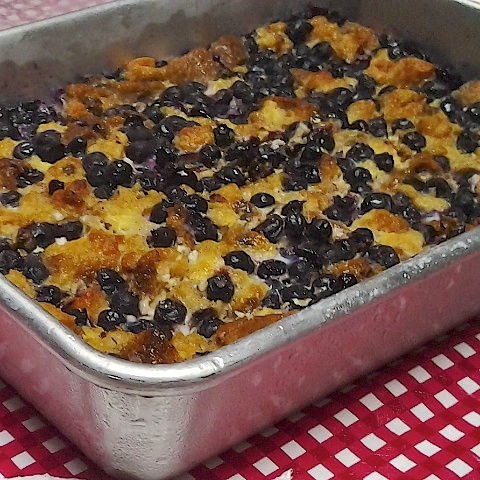 This month’s First on the First theme? The humble bread pudding. The terms of food history, the story of bread pudding as a dessert began a bit like my story for this recipe: It was out of necessity. I needed to bring a dessert to a potluck party and had no time (or inclination) to go to the store – so I had to use ingredients I had on hand. I find while I can usually make baking substitutions for situations in which my refrigerator is bare of milk (by using powdered milk,) eggs are a different story. (How I wish my village allowed chickens!) So assessing the ingredients available in my fridge, freezer and pantryHouskand: Frozen houska bread leftover from Easter, whole wheat bread containing so much wheat fiber no one in my house found it palatable, powdered milk, and frozen blueberries we picked this summer. And thus this Blueberry Bread Pudding was born.

Like many ‘ancient’ recipes (Baked Apples comes to mind) which are about 5,000 times more delicious than any one recipe ingredient, in my recipe, (powdered) milk combined with the eggs and cooked into custardy deliciousness; cinnamon, sugar and good vanilla added luscious aroma; and blueberries made the dessert something special enough to take to a pot luck without hiding it in a nondescript casserole carrying case.

Creamy custard with bread: Vanilla, blueberries and leftover bread combine for a dish worthy to take to a potluck or party!

Carrie @ poet in the pantry

That's the greatest part--it really is making the best of what you have on hand! Nice touch with the blueberries!

This sounds delicious! I adore blueberries and think they must have been so good in this bread pudding. Yum!

Wow, I'm impressed that you were able to throw things together based on what you had on hand and came up with something that looks this delicious! I know I could never do that!! Great pick this month!! :)