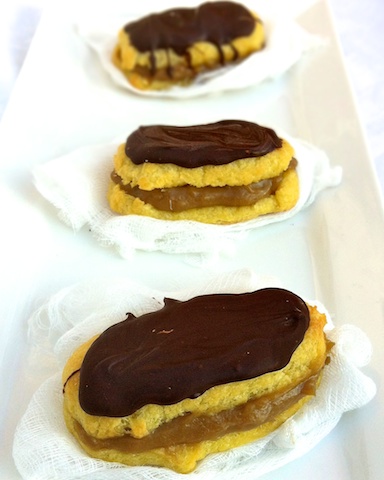 When I heard this month’s First On The First challenge was eclairs, I admit I was a bit cocky. I’ve made cream puffs before and the pastry base or the “choux” is the same for eclairs. And cream filling? I make homemade pudding all the time. Chocolate glaze? No problem.

Well, let’s just say it was definitely a learning experience (which I guess is the whole point of this cooking challenge anyway, eh?) I decided to leave myself in Fanny Farmer’s hands – my usual go-to cookbook for basic, foolproof recipes. With a couple tweaks, my choux actually turned out very nice. The dough came together quickly and now I’m thinking “these suckers are going to be a snap to make.” I piped the dough into pretty 4-inch long x 1-inch wide rectangles, yet after removing them from oven, I realized there was zero height because I made them too thin. Not exactly optimal for a pastry you have to fill. (Note to Fanny Farmer: include a height measure in next addition.) The second batch was a winner.

Onto the cream filling: since I make roux for mac & cheese as well as stovetop pudding often (two recipes that thicken as they heat), I figured I could make a few tweaks to the recipe right from the start, using fat free milk and a bit less sugar. You know where this is going – mistake. The filling never quite thickened – and it’s really not a good thing to have your eclair cream dripping completely out of the pastry leaving nothing but a puddle on the plate. For the second batch, I ditched the flour completely and used cornstarch instead, which worked its thickening magic. By the third batch, I added my peanut butter and banana tweaks (and at one point, did consider just eating it as pudding vs. filling in those eclairs.)

The chocolate topping was no fuss – I melted chocolate chips and peanut butter together in a saucepan – which worked fine the first time around (thank goodness.)

By the time I assembled all the eclairs (with just 2 -3 that looked halfway decent at best) I was relieved, glad I participated in the challenge and definitely enjoyed the flavors of chocolate, banana, peanut butter and pastry all coming together. But in reality, I’ll probably leave the eclair creating up to the bakery professionals the next time I need a French pastry fix.

Basic Choux (for pastry base)

To assemble eclairs (before making glaze): 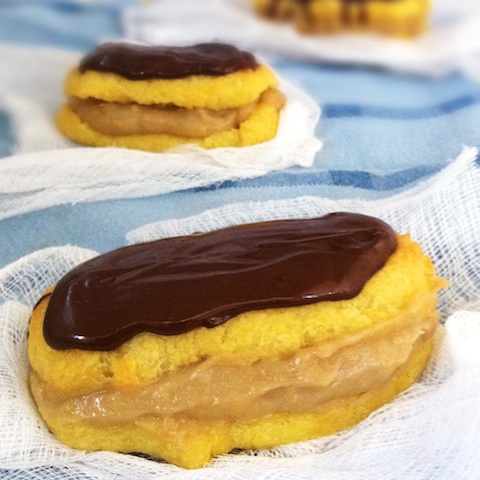 OMG, these sound fabulous!!! And this reminds me so much of my first exam in culinary school. I had to make some pastry cream, and while it was setting up, some choux puffs. It took me two tries to get the puffs just right. But I hadn't cooked the pastry cream enough to thicken, and it was literally pouring out of my bag/tip all over my work station. So I tried to spoon it in, but it kept running out. While I was fooling with it, my chocolate heated up too much and separated. The whole thing was more like cream puff soup.

It makes me feel a tad better than a trained professional also had the same issues :) Love your recipes!

Donna @ What the Dog Ate

I think we were baking in parallel kitchens this month. My filling didn't really thicken, and I too had quite a few "height challenged" eclairs. But they were tasty! Love the flavor combo. Very creative.

That was an inspired flavor combo!

I'll admit - I really prefer to make cream puffs, too!

I love the peanut butter/banana/chocolate combo!