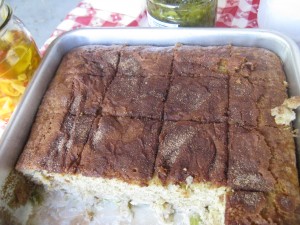 Since the redesign of our Web site launches today, we’re still in the spirit of cake around here. So, I’m posting the recipe for my all-time favorite cake.  And when I say “all-time,” I also mean for-a-long-time, as in, since high school. Now maybe it’s a Montana-thing (that’s where I grew up,) but our end-of-the-season sports banquets used to be pot-lucks! Most moms probably did the pot-luck-dish-prep for their teens, but in our house, I used these events as another excuse to make my favorite Rhubarb Spice Cake.

In high school, I exactly followed the simple recipe which was written in my grandmother’s curvy script on a sticky, spotted recipe card. But over the years, I’ve adapted the recipe to the following version by decreasing the fat and sugar and adding the nuttiness of whole wheat flour. The cake is extremely transportable and is delicious for brunch, my kids’ afternoon snack or a perfect spring-time dessert. I made it yesterday for a Memorial Day pot-luck and it got rave reviews.

Preheat oven to 350°. Spray a 9×13-inch cake pan with cooking spray; sprinkle rhubarb over bottom of pan and set aside.

Bake for about 60 minutes or until toothpick inserted in center comes out clean. 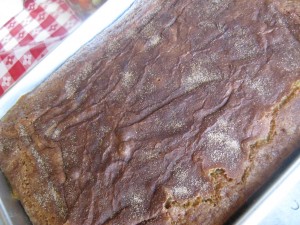 Community pot lucks were definitely an Alabama thing, too. Although I'll confess... this is a new cake for me. I love a crackly sugar crust, though. So I'm sure the cake and I would get along quite nicely!