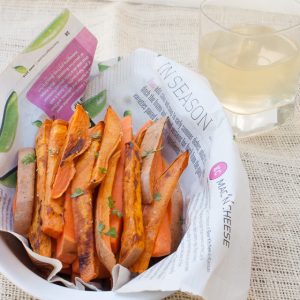 [This recipe was originally published in 2016 as part of The Recipe ReDux when I was compensated to manage this recipe contest.]

I’ll admit, I don’t really understand the food science of how apple cider makes these baked fries so crunchy on the outside. But, the crunch-factor is seriously close to what happens when you fry them to a crisp in oil!

That’s where the food science does come in… 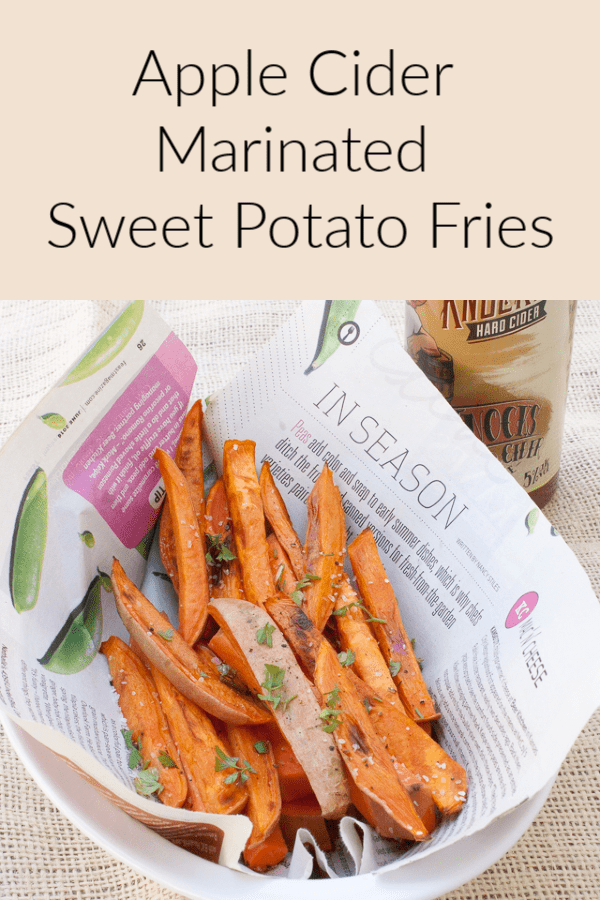 I decided to go with the hard apple cider because I wanted to make this a low FODMAP recipe. (Apple cider juice is higher in FODMAPs than hard apple cider.) As a dietitian, I don’t generally get excited about ‘diets.’ But I do when that diet is the Low FODMAP Diet developed by Monash University in Australia. (I did some undergrad nutrition study in Australia – and I can tell you, the Australians do cutting-edge research in many areas of nutrition.)

FODMAPs are simply ‘fermentable sugars’ that ferment in the gut causing gas, bloating, stomach upset and other distressful symptoms in the gut. And the Low FODMAP Diet has helped people with ‘tummy troubles’ 1) learn which foods are high in FODMAPs, 2) temporarily stop eating them and 3) help heal their GI system.

My Apple Cider Marinated Sweet Potato Fries recipe is part of our Recipe ReDux “Feeling Fab Without FODMAPs” #sponsored recipe contest. And I’m happy that our sponsors of this contest, the researchers at the Nestle Health Science have newly designed an excellent educational LowFODMAPcentral website on the Low FODMAP diet.

Sweet potatoes are a great source of fiber (and prebiotics) for everyone. This is especially true for those on a Low FODMAP Diet – since several of the foods eliminated from their diets are high-fiber foods. One note: Some experts have reported that sweet potatoes can cause occasional ‘tummy troubles;’ if this is the case, keep your sweet potato serving size to about 1/3 cup.

Now about that hard apple cider… 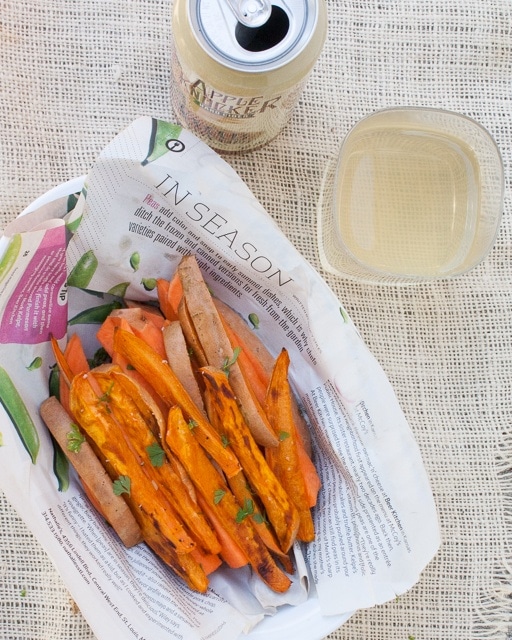 If I were on a Low FODMAP diet now during apple season, I would be very sad to avoid apples. So I say, add apple cider! Apple cider is generally tolerated by folks sensitive to FODMAPs as few of the fermentable sugars in apples remain in hard apple cider. Also, in this recipe, very little cider is actually absorbed by the sweet potatoes. But you still get happy apple flavor….AND aroma. You’ve gotta smell these apple-aroma fries.(: #AD Extra crispy baked fries: Apple Cider Marinated Sweet Potato Fries via @TspCurry #TheRecipeReDux Click To Tweet

And if you found these fries finger-lickin’ good, check out the recipe I featured in the Tailgating/Super Bowl Edition of #HealthyKitchenHacks for Beer Marinated Fries.

This trick will make your sweet potato fries crispy on the outside and soft and creamy on the inside: Try this Healthy Kitchen Hack today for Apple Cider Marinated Sweet Potato Fries!

Do you make baked fries? Have you heard of anyone on the low FODMAP diet? 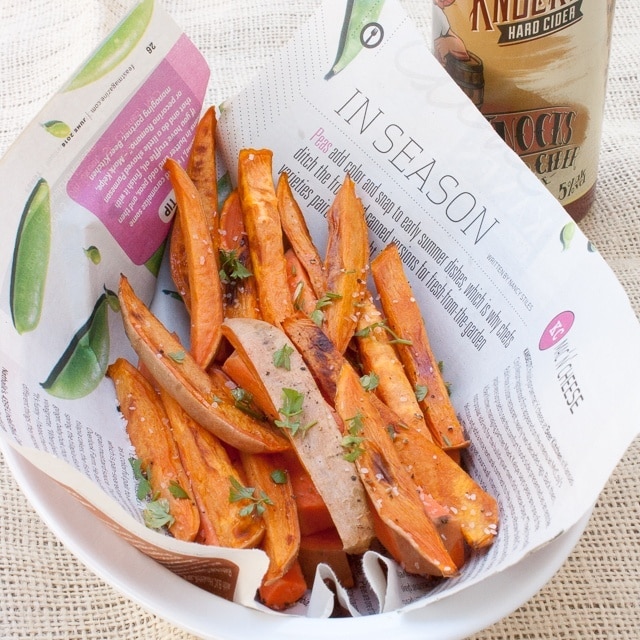 Hi Serena, thank you this delicious recipe. I have a friend who is suffering from IBS or irritable bowel syndrome and she said that she is looking food that can be considered Low FODMAP and here I am in your blog, thank you for sharing your recipe and I will share this to my friend, since sometimes she is having this bloating in her stomach so she really need some Low FODMAP foods. Thank you for this post!

You totally made my day Kates! My fingers are crossed for your friend. Let us know how it goes for her!

What a creative recipe!!! I love the creativity here and YES I love baked fries! Adding this to my arsenal!!

Thanks Liz. Grab a can/bottle of cider and bake away! Not bad prospect, hey? (:

Love this idea! I wonder if marinating in beer would work too because it only has minimal amounts of gluten. Either way, looks delish.

YES! Great point Sarah...from my research, beer has even less potential FODMAPs (fermentable sugars) than apple cider. I make beer marinated fries (with white potatoes) all the time and they are awesome. I will say I really loved the slight hint of sweet apple in the final sweet potato fries when marinated in cider...but I'll bet beer + sweet potatoes would be awesome too!

oh my gosh! YES!! These sound amazing!! As someone who has used the low FODMAP diet to help with tummy troubles, I can sometimes eat small amounts of apple but too much causes many of my "symptoms" to come back. I did not know that many of the FODMAPs were fermented out in alcohol…so that is happy news for me! Thanks for sharing that link. Can't wait to read her post!

I geek out on food science too Tara. So this research was super interesting to me. Hope it helps your tummy troubles. ): Thanks for helping others with theirs!

These sound amazing!!! I'll take anything with sweet potatoes :-)