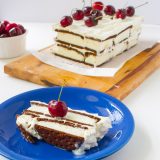 Line a 9 x 5-inch bread pan with parchment paper so the sides hang over the edges.

Place yogurt and cream in a large (chilled) mixing bowl. Using an electric mixer or a stand mixer, whip cream until peaks are fluffy, but stiff. (It’s much harder to over-mix cream with the addition of yogurt. So don’t panic, whip until it’s a consistency that will spread and stick to the ‘cake.’) Mix in vanilla extract.

Top cream layer with 3 more whole sandwiches and 3 more sandwich halves. Top with the remaining cream, making waves in the top of the cream layer for a ‘fancy’ look, if desired.

Chill in the freezer for at least 1 hour. To serve, let Ice Cream Sandwich Cake stand at room temperature for 15 minutes to soften. Slice with a serrated knife.

If time allows, chill mixing bowl and beater/s in the refrigerator for 10 minutes before whipping cream, for faster thickening of cream.

Heavy whipping cream contains no sugar and no hydrogenated oils (like Cool Whip!) I like to add it whipping cream to Greek yogurt for healthier whipped cream that mounds up beautifully and really hard to overwhip.